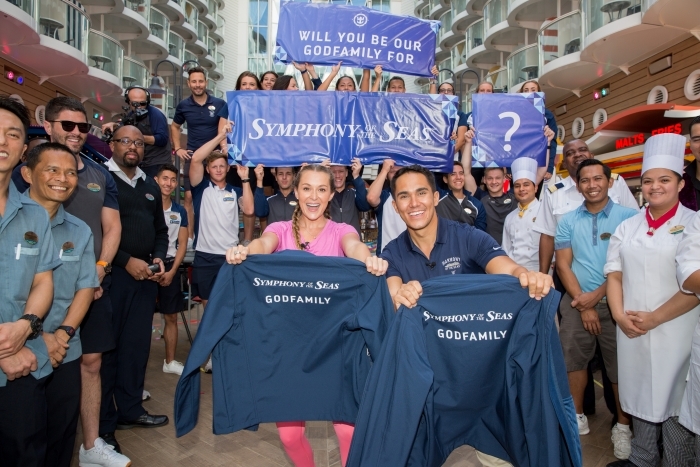 What is a ship’s Godmother anyway? Since ships were conceived, and information
about them recorded, there have been rituals around the christening of a new
ship. Human sacrifices provided blood that was then spilled on board in order to bring the new ship luck on the seas. In modern times a civilian, usually a woman,
is chosen to christen the new ship, as well as watch over it and offer symbolic
protection. Instead of blood, a champagne or wine bottle is broken on the bow of the ship and a celebration ensues. Some Godmothers are
controversial, some are silly, but others are inspirational. Recently even the first Godfamily was named. Let’s take a trip back in time and look at five inspirational ship Godmothers.

The godmother of Royal Caribbean’s
Freedom of the Seas was chosen by public vote. The Portland, Oregon foster Mom, who through the years has fostered over
400 special needs children, was surprised in the early morning hours at her
home by the Today show crew. Answering the door holding one of her foster children, Calder graciously
accepted the appointment. What better
mother to be chosen godmother, than a mother who has so selflessly devoted her
live to children in need? Hopefully
Calder also received a well deserved vacation for herself as well!

Jessica Lynch is a former US
solider who was captured in 2003 by Iraqi forces at the Battle of
Nasiriyah. She became famous as the
first successful rescue of a woman prisoner of war in the United States. A lot of controversy surrounds the
circumstances of her capture and subsequent rescue. Lynch criticized the US government for
creating or allowing false rumors about her valor and injuries. She was quick to point out that the other
members of her convoy, who all were killed, were just as brave, if not more so
during the attack, as her gun jammed right away not allowing her to do much
other than pray. However, regardless of
the circumstances, her commitment to her country provided by her military
service, and her service as an elementary school teacher upon her return, make
her a hero in our book!

In 1983 32-year-old Sally Ride became
the first American woman and the youngest person to travel to space. On board the Challenger, she traveled to
space in two separate missions, spending a total of 343 hours in space. She also participated on the committee to
investigate the Challenger and Columbia disasters. During her time in space she helped deploy
communications satellites, pharmaceutical experiments, as well as help develop
and use the space shuttle’s robotic arm. Ride died of pancreatic cancer in 2012 and it was reveled after her
death that her long-time partner was Tam O’Shaughnessy. Ride is the first known LGBT astronaut.

Born Catherine Elizabeth Middleton
in 1982 Kate married Prince William, Duke of Cambridge in 2011. Following in the footsteps of William’s
mother Diana, Kate has become a beloved figure of royalty. Her advocacy and charity work, focusing on
children, addiction, art, and mental health has made her a figure of modern
public service. The couple now has three
children; Prince George, Princess Charlotte, and Prince Louis of
Cambridge.

Chris Evert was born Christine
Marie Evert in 1954. Born to tennis
coach Jimmy Evert, Chris began her tennis training at a very young age. In her teens she was already ranked number one in the United States, and by the mid-seventies and into the eighties, she was
ranked number one in the world. Evert has
won many awards throughout her career and now runs a tennis academy in Florida
as well as coaches at Saint Andrew’s high school. In 2011 she joined ESPN as a tennis
commentator and she contributes and has also helped publish Tennis magazine.

**Bonus!  The first ship Godfamily was announced in May 2018. Actor Carlos PenaVega and his wife, actress Alexa PenaVega, along with their young son Ocean, were asked by Royal Caribbean to be the Godfamily of the world's largest cruise ship Symphony of the Seas. This long standing tradition may be evolving, and it will be exciting to see what the future holds for Godmothers of these magnificent vessels!