Hurricane Willa and the 2018 Awards Conference on the Norwegian Bliss 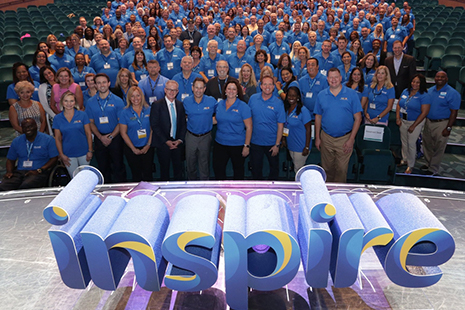 Last week hurricane Willa changed the travel plans of
thousands along the west coast of the US and Mexico, including an annual travel
agent conference aboard the Norwegian Bliss. Originally destined for the Mexican
Riviera, the ship’s itinerary changed to avoid possible danger in the hurricane’s
path. A quite fitting experience for a large group of travel agents who spend
their days informing clients that weather can always change travel plans. The
good news for cruisers is that a ship is generally a great place to be when
weather plans change, as the ship can easily reroute, but a land vacation
cannot.

Our own Gary E. Smith, ECCS, was one of the vacation
specialists and franchise owners onboard the Bliss. Gary was recently named
2018 Elite Cruise Counsellor of the Year by Cruise Lines International
Association (CLIA) at its annual Hall of Fame Awards reception during the
Cruise360 conference in Fort Lauderdale, Fla. The Elite Cruise Counsellor of
the Year award is the highest accolade a travel agent can receive in the U.S.

TravelPerks Dream Vacations is no rookie when it comes to
winning awards. Nearly every year since the company began fourteen years ago,
TravelPerks has received an award at the yearly franchise conference. 2017
proved to be an exceptional year of awards for TravelPerks, being awarded Top
Producer status from two cruise lines and a shore excursion group, as well as
being added to the Dream Vacations Circle of Excellence and awarded #2 in
selling for the entire franchise.

Now on the heels of the prestigious Elite Cruise Counsellor award,
the TravelPerks franchise has wrapped up the 2018 Dream Vacations conference
with a whole new batch of awards to return home with.

2018 Awards and Recognitions include:

-CLIA
Agent of the Year

“We are thrilled to have achieved national top producer
awards for so many of the best cruise lines, including first time awards for
Disney Cruise Line and Princess Cruises. These achievements are a testament to
the amazing staff we have working in our Springfield offices, along with our ability
to be the very best place to buy a cruise in terms of both savings for our
clients, and the high level of service we provide.” said Gary E. Smith,
ECCS

What a great way to close out our year on a high note. Here
is to many more awards and many more years of exceptional travel service at
TravelPerks!

"You all ROCK!  I have complete confidence in getting all the details and great pricing.  No gimmicks"
– Amber K. - RCCL Freedom of the Seas